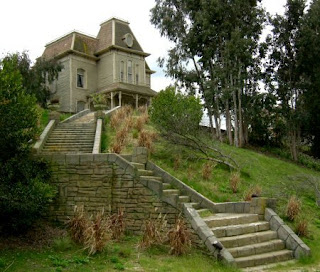 I just can not start a sentence with that line enough.

Okay, this is the first time I have started a sentence like that. A recent line heard our car was, “I wish you liked Mansard roofs as much as I do,” from my husband bemoaning the fact that I prefer the Times Square Building to the Powers Building…but I digress.

It was a warm summer day a few weeks ago as Cynthia was touring the Preservation Division and our interns around Corn Hill. We were on Plymouth looking at some beautiful homes, fortunate to escape the DOT and Urban Renewal wrecking ball, and commenting on Second Empire style and Mansard roofs.

“Speaking of Mansard roofs,” I said to no one in particular, “Did anyone watch Psycho on tv last night?” No one had. A shame.

It got me to thinking, though, about popular culture and my internal filter as a preservationist. Now, I’m not talking about overt connections, like the subject of Katie’s recent article in The Landmark Society Summer Special newsletter, where architecture or historic preservation are the theme, but more how their appearance in general films, etc. piques me interest.

Psycho is a perfect example. Beautiful old “mansion” where a homicidal woman “lives” with her son. Have you ever noticed the woodwork in the house? The railings on the stairway down to the basement? The roadside architecture of the motel itself, built before the highway diverted traffic from the country roads.

Have you ever seen Hush, Hush Sweet Charlotte? What a great house. I can’t possibly be the only person ever to watch it thinking, “This is exactly why we have Section 106 review now, to keep these kinds of resources from being lost to highway projects.” I wished that Charlotte had found some other way to kill her scheming cousin than pushing the urn onto her from the second floor balcony. Don’t take it out on the house!

And Stephen King movies! Rose Red was a good story turned into a really crappy movie but who can resist a ghost story in a mansion? Not me. I watch it just for the architecture. You might not know it, considering the movies that I’ve listed so far, but I don’t really like scary movies – but I love Ghost Ship, just for the ship. It is as if the Titanic hadn’t sank but was merely haunted. Its also the closest I am likely to ever get to that kind of floating opulence.

Even modern comedies have their place in this discussion. Two ridiculous guilty pleasures – Old School and Saving Silverman – feature stunning historic craftsman style homes for the main characters. The directors are choosing these sites for the films because these houses have so much more life and style to them then suburbia. I am probably the only person to watch Old School just for the fireplace and mantle.

Yes, Laura, I am a preservation dork. 5 thoughts on “Speaking of Mansard roofs…”