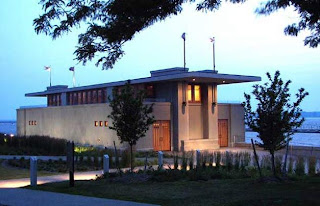 This past summer, I was a part of Landmark Society’s day tour to Buffalo for Frank Lloyd Wright’s legacy. Being an architecture graduate, I always wanted to visit these places and see the wonders of his thought and to determine, if what we were taught was really true or just exaggeration! I must admit, I was completely enthralled!

I have always been awed with FLW’s work, to me he is not only one of the father’s of modern 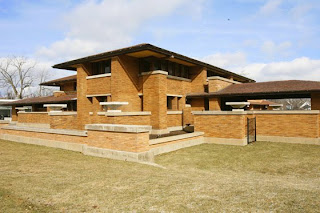 movement, but somebody who laid the foundation of American architecture with his path breaking philosophies and designs for his time and age. Our tour started with a mystery bonus stop at the Boathouse, a project designed by FLW as a boathouse for University of Wisconsin, but could only be constructed in 2007, now the headquarters of West Side Rowing Club. It was fascinating to see, how FLW had the ability to make architecture which was timeless, after more than 100 years later, this piece looks so modern and appropriate even today. Unfortunately we could not go inside the building, but we got a 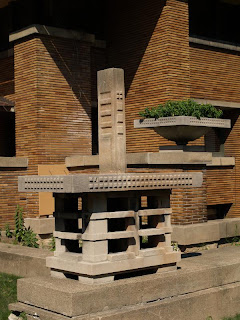 sneak peek from the bus.

Our next stop was Darwin Martin house complex; we took an hour long tour of the facility and were fortunate enough to see another architectural marvel by one of the contemporary architect Toshiko Mori. This beautifully constructed glass box is an interpretive center where you can see the state of the art film on Darwin Martin, the businessman and the greatest architect of America, Frank Lloyd Wright. For me, visiting this house was very special as in my modern architecture class, I always learnt about the principles of Wright’s organic architecture, merging the interiors with exteriors, breaking the box and his itch for Beaux Arts style. Now I could see all these principles such beautifully tackled at the Darwin’s house. It was also fascinating to learn stories about his quirky nature and how he ruled his designs. It was interesting to learn that how obsessed he got with details and even designed the movement pattern in the house, with lowering the heights and narrowing the doorways. 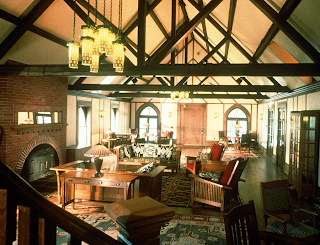 We had a lunch stop at the famed Roycroft Inn in East Aurora, the unique Arts and Crafts community in upstate New York. It was interesting to learn that Elbert Hubbard, the original owner of the inn was Darwin Martin’s brother- in-law and hence was also related to Frank Lloyd Wright. The building was a great example of Arts and Crafts style but to me, the most fascinating aspect was the stature of this place in the history. I was so pleased to see that the building was saved with advocacy efforts by the Landmark Society and how it adds to the architectural and historical splendor of the area.

Our last and final stop was Graycliff, summer home of Isabelle and Darwin 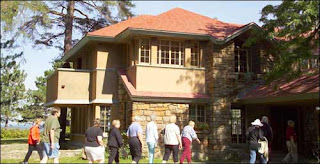 Martin in Derby. It is believed that Isabella never liked her house in Buffalo as the large eaves of the house could never let enough sunlight in and for this house she wanted Wright to design a house of sunlight. I have not yet been to falling waters, to me this house truly exemplified the philosophy of organic architecture, designing from the site and deriving inspiration from nature. The house stands on a 60’ high cantilevered cliff above Lake Eerie. He tried to recapture nature by merging the interiors with the exteriors by cantilevered, floating second floors, and corner glass window with uninterrupted views of the lake.

This tour is a must for all Frank Lloyd Wright’s admirers and we would like to thank everybody who could be a part of the trip. We have this tour next year as well, so sign up, before you miss it!