I learn something new in this job every day. FLW houses, yes. Even Lego sets. But gas stations? Who knew. Certainly not I. That is, until I saw this article from the Buffalo News:

Businessman James T. Sandoro has transferred a pair of downtown properties to his transportation museum, paving the way for construction later this year of a re-creation of a Frank Lloyd Wright-designed filling station and an expansion of the museum. 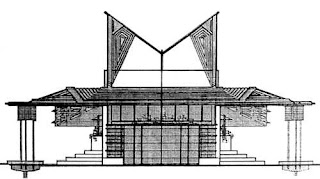 Sandoro this week shifted the properties at 211 Seneca St. and 268 Michigan Ave. to the Buffalo Transportation/ Pierce-Arrow Museum. The transaction was valued at $1.25 million, according to records in the Erie County clerk’s office, although Sandoro said it was just part of a “paper” transfer of all of his properties to the museum for estate planning purposes.

The move also was necessary as part of his plans to enlarge the transportation museum and build the gas station originally designed by the famous architect. He said he hopes that will draw about 50,000 people a year, up from about 10,000 now.

The entire project will ultimately cost $10 million to $12 million. Sandoro has already raised $6.3 million in state funds, with the rest to come from the state and private sources. He is contributing the real estate and his collection of about 250,000 pieces of transportation-related memorabilia, which are now housed in 13 buildings. The collection includes six Pierce-Arrow automobiles, thousands of car parts and other vehicles.

The 20,000-square-foot museum recently underwent a face-lift, with a new brick facade.

Sandoro, who owns several downtown parking lots and is executive director of the nonprofit museum, said he wants to break ground on the gas station in the spring with Gov. David A. Paterson.

He said he hopes to have the steel up by August and to finish the station by fall 2011, when the National Trust for Historic Preservation holds its annual convention here for the first time.

Plans call for a 60-foot-high glass-and-steel atrium that will enclose the gas station. Part of the gas domes and a 37-foot copper spire are already built and on display in the museum at Michigan and Seneca.

The next phase will be a 60,000-square-foot addition to the museum building, to house the rest of the collection and a minitheater that will show films on transportation and Pierce-Arrow history.

(Image: Artist’s rendering shows the Frank Lloyd Wright-designed gas station that will be built at the Buffalo Transportation / Pierce-Arrow Museum at Michigan Avenue and Seneca Street by fall 2011.)