Finally – Get money for rehabbing your house! 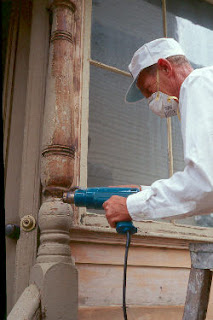 Last night, I attended the first information session on the new NYS Residential Rehabilitation Tax Credit program, hosted by Assemblyman Sam Hoyt and a slew of preservation organizations in Buffalo. Staff from the NYS Office of Parks, Recreation and Historic Preservation (also known as SHPO) presented information about how the credit works, who can take advantage of it, and the process to do so. We’ll have a similar session in Rochester soon, but in the meantime, I thought I’d pass along the basics.

First, who qualifies? This is a program for owner-occupied housing only – no rental properties. The house must be listed in the National Register of Historic Places (either individually listed or in a district) and must be located in a census tract where the median income is at or below 100% of the State Median Family Income. It doesn’t matter what the homeowner’s personal income is, just what the average is for the tract. I have a list of census tracts in Monroe County that qualify and can also find out whether your house is listed in the National Register; so far I know that parts of Maplewood and Browncroft qualify, as well as all of the Susan B. Anthony District. I haven’t seen a map yet, but I suspect parts of the South Wedge and Mt. Hope neighborhoods will also qualify. There are other neighborhoods in the city that are eligible for the National Register but have not yet gone through the designation process, and would be able to take advantage of the credit if they did so.

Most of the rest of Monroe County does not qualify under the income requirement, but large portions of the other counties in our service area do. At last night’s workshop, SHPO displayed helpful maps that illustrated exactly which areas are eligible, and we’ll make that available for Rochester as soon as we can.

To take the credit, it isn’t enough just to live in the house – you have to do at least $5,000 worth of work. SHPO staff must review the proposed work in advance to let you know if it meets the standards. At least 5% of that work has to be on the exterior; that can include roofing, painting, chimney work, and many other projects (but not landscaping or fences). Interior work can include almost anything from floors to ceilings. One type of project that would not qualify would be installation of vinyl windows; replacement windows could be covered if the existing windows are inappropriate, missing, or truly beyond repair, but the replacement windows would have to be appropriate to the building, and SHPO staffers were quite clear that vinyl windows would not be considered appropriate.

Keep in mind that this is a rehabilitation program, not a restoration program – the difference is that while restoration is about returning a building to its historic appearance rehabilitation has to do with keeping significant historic features while adapting the building to modern use. This means that you won’t be required to bring back missing features or turn your house into a museum!

The credit will cover 20% of the cost of the rehab – so for a $5,000 project, you’d get to take $1,000 off of your state income taxes. The credit maxes out at $50,000 per project, so if you are spending more than $250,000 on your project, you’ll only (!) get to take $50,000 – but note that this is per project; SHPO staff seemed to think a project could be broken up into multiple projects so that homeowners can take the credit more than once. Homeowners may spread the credit out over multiple years if their tax liability is not high enough for them to get the credit, or owners whose income is less than $60,000 can take the credit as a rebate.

One of the most interesting questions at the workshop last night had to do with a house that, in its current condition, would not be considered National Register eligible. This homeowner would like to take the credit for work such as porch repairs, asbestos siding removal, and window repair that would return it to its historic appearance. When the property is complete, it should be eligible for National Register designation, but can this homeowner take the credit given that the property is not now eligible? SHPO staff couldn’t answer definitively, but I certainly hope that they will be able to work with owners in this situation, since this is exactly the type of project that this program should support. Removal of vinyl siding and/or reversal of other inappropriate alterations from one house can be a catalyst for similar projects throughout a neighborhood.

The process for obtaining the credit is pretty simple. There is a three-part application: part 1 asks the homeowner to list basic contact information and the location of the house, as well as answer a few simple questions that will help SHPO staff determine whether the house qualifies. In Part 2, the homeowner describes the house and any past alterations, describes the proposed work, and provides photographs of the house, as well as drawings of any new construction or alterations. Part 3 is completed after the work is done, and certifies that the work was completed as proposed. The owner must provide photographs of the completed work.

Projects can’t be complete until January 1, 2010 (projects now underway that won’t be done until January may qualify – contact SHPO to discuss) and the program is scheduled to sunset in 2014.

SHPO has a brochure about the credit and the application form online.

This program has the potential to be a great tool for revitalization, both in our existing National Register districts and in those that qualify but have never been designated. If you’d like more information about how to get started on your own project, get your community to qualify, or spread the word in your neighborhood, please give me a call!

Finally – Get money for rehabbing your house!

4 thoughts on “Finally – Get money for rehabbing your house!”