CAPE MAY WITHOUT THE OCEAN! 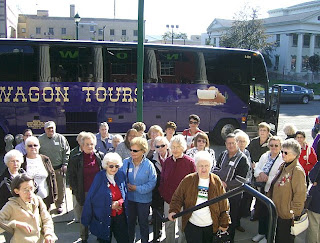 We just returned from our day trip to Elmira last Friday. Elmira is just 2 hours away and nestled at the foothills of the Allegheny Mountains in New York State’s “southern tier.” Our group hopped on the motor coach and drove south into the historic city.

Being familiar with this historic city, I decided to pull together a motor coach day tour. I came to know that Elmira is built almost entirely in the flood plain of the Chemung River and has suffered many floods over its history, the worst from Hurricane Agnes in 1972. But I also found out that Elmira is the home of the Near Westside Neighborhood District. Located on the National Register the district is rich with architectural jewels and holds one of the highest concentration of Victorian style architecture in the country with over 450 structures on the National Register. One tour participant stated that Elmira is “Cape May without the ocean” and
boy were they ever right. In doing more research on the city I came upon historian Samuel Draper. Samuel is a tour director, historian and advocate for the cities historic district and wonderful history and architecture. I told him we wanted to visit his city and we spoke in length about what type of tour I was looking for and what he could offer us as a preservation organization. With Samuel’s knowledge of the city he pulled a wonderful tour together for our group.

After confirming an itinerary and settling on a date, I started to advertise this tour. I wanted to mention that after a few months, a woman from Akron Ohio was on the computer researching Victorian architectural tours. 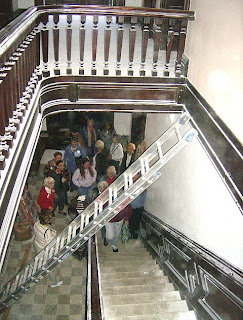 She came upon our web site! She called me and she decided to book the tour with us, stay in Elmira a few days and meet our group in Elmira! Another lady from Massachusetts came to Rochester to visit relatives and decided to book this tour too! What a thrill for both everyone! We can honestly say now that our tours have gone nationally.

Samuel, being excited that we were coming, spread the word around his city. Within a few days I was receiving calls from The Christmas Tree Shop asking if we would like to make a stop in their store and I also received a call from the East Side Farmers market asking me if our group would like to make a stop for some local fresh produce. I decided to put both stops on the itinerary.

We departed on a beautiful bright sunny Friday. Upon or arrival, our first stop was at the Arnot Art Museum, where Samuel greeted our group. And there we met our travels from Akron Ohio. The museum is housed in an 1833 neo-classical home of the Arnot family. The collection includes 17th, 18th and 19TH century paintings as well as 19TH and 20TH century American art and bronze sculpture. WOW! What a wonderful stop and everyone was thrilled with their collection and exhibits. 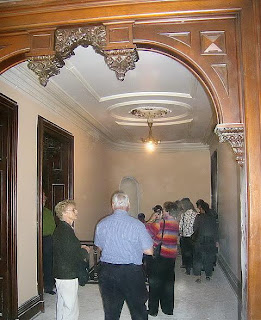 After our museum tour Samuel give us a driving and walking tour of Historic Elmira including the Near Westside Neighborhood. This is neighborhood is designated as having the largest concentration of Victorian style homes and architecture in the nation! The historic district has over 450 nationally registered homes in twenty square blocks! As an added treat we will view the interiors of several of these historic homes! Some of these homes were under renovation, but the group enjoyed walking under ladders, through dark room, stepping over cords, and all sorts of tools and lumber. We actually should have worn hard hats in some of the homes!

Oh I wanted to mention that during our driving and walking tour, Samuel took us through alleys, their “hood” and drug districts. Unfortunately some of their wonderful historic homes are in these neighborhoods, but the area is becoming revitalized. Everyone was fascinated. 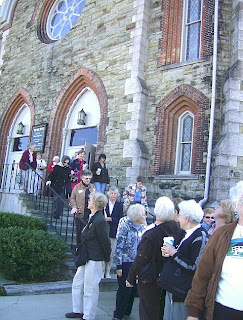 One of our stops was at the historic The Park Church located on West Gray Street. They had a wonderful antique (1850’s) melodeon which the church organist, Joseph Barber played for our group. One of our tour goers, Joyce Lawrence who plays the organ, asked if she could get a closer look at the melodeon. Joseph asked her if she wanted to play it! We all stood around watching Joyce play and everyone in the group sang along. Many of us had tears in our eyes it was so touching. Joyce said it was the highlight of her day!

After our tour, we had a delightful lunch at Horigan’s Tavern, located in the National Historic District. Incidentally, I had the best Reuben sandwich…. EVER! I’m told that they are noted for their wonderful food. I personally think its worth a drive to this tavern just to eat!

After lunch we toured Mark Twain’s Study on the Elmira College campus. The study once overlooked the city from atop East Hill and still contains some of its original furniture. What a treat this stop was. 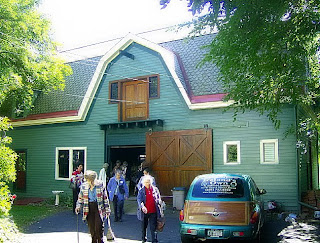 Before heading home, we made a fun stop at The Christmas House. This Queen Anne mansion features six decorated rooms beautifully adorned with a variety of classic Christmas decorations and gifts. Some even did a bit of early holiday shopping!

Our last stop was at the farmers market where many of our group picked up some fresh local produce. I personally picked up a gallon of fresh squeezed cider.

We certainly had a fun day and I advise everyone who is in the area to make a stop in the beautiful historic city of Elmira!

And who else but the Landmark Society to take you through dark alleys, the hood, construction sites, uneven streets, walking under ladders and having lunch in an authentic tavern!

CAPE MAY WITHOUT THE OCEAN!