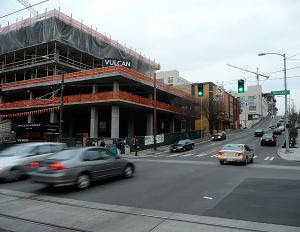 An interesting article from Seattle points out the need for environmentalists and preservationists to find common cause as that city pursues its strategy for a “sustainable” future.

According to the author of the article, Seattle’s sustainability policies suffer from a single-minded focus on increasing density. There are clear environmental advantages to denser urban fabric: a certain level of density is needed to ensure walkability, viable public transportation, lively street life, and so on, and directing redevelopment toward a region’s core reduces the pressure to sprawl outwards. The author of the article argues, however, that Seattle’s pursuit of increased density comes at the exclusion of other goals, including historic preservation and the conservation of the embodied energy that old buildings represent.

The issues in Seattle are so different as to be almost unrecognizable to us in Rochester: in Seattle (and some other trendy cities) the demand for high-rent housing in desirable city neighborhoods leads developers to eye existing buildings for demolition and replacement by higher-density apartments and condominiums. Redevelopment of hot city neighborhoods has always resulted in the demolition of older buildings, but now some cities like Seattle are encouraging this process as evidence of their “green” credentials.

Unlike in Seattle, here in Rochester the resurgence of downtown housing has (so far, at least) taken the form of the adaptive reuse of existing buildings, with the exception of the Sagamore, which was built on a long-empty lot (of which there are many left to be redeveloped, as a flight over downtown or a peek at Google Earth will dramatically reveal). We have not seen the demolition of historic buildings to make way for high-density downtown housing. Instead, we have the opposite problem: although our region’s population is not growing, it is continuing to spread ever more thinly across an ever-widening area, leading to the decline of existing neighborhoods in the city and suburbs.

In Rochester and Seattle the issues are different, but the point is the same: as communities think about how to be greener, a great place to start is the recognition that the existing building stock is a critical environmental resource that must not be squandered. It would be unfortunate if environmentalism became yet another justification for treating historic buildings as disposable, when in fact the reuse of existing buildings conserves their embodied energy and keeps their irreplaceable materials out of the landfills.

Richard Moe, President of the National Trust, may have said it best: “It makes no sense for us to recycle newsprint and bottles and aluminum cans while we’re throwing away entire buildings, or even entire neighborhoods.” 1 thought on “A green conundrum: sustainability, density, and preservation”